How do I Cure a Smelly Head?

Robert Aron asked:
How do I cure a smelly head?

There are several possible causes of a smelly head on a boat. The hardest part is to determine where the smells are coming from. After that it should be fairly easy to fix the problem. There are a few variables that you have not covered but we will try to deal with those as well.

The possible causes are:
• Holding tank is full and needs to be pumped out
• Blocked vent forcing the exhaust back into the boat
• Sludge build up in the holding tank
• Blockage in pump out hose
• Defective or non-functioning macerator (optional on some boats)
• Defective or non-functioning vacuum flush system (optional on some boats)
• Damaged hoses usually caused by age or from using inferior holding tank chemicals or homemade concoctions or no chemicals at all, resulting in permeation odors.
• Disconnected or leaking hose
• Damaged or plugged Duckbill Valve
• Damaged or plugged Flapper Valve
• Salt water used for flushing

The first thing to do is try to determine the cause, or causes, of the odor. I recommend starting at the exit points and working backwards. Most boats today have a holding tank so for the purposes of this article I will assume that you do as well. You can print out this article and use it as a checklist.

1. Start your diagnosis by examining the through hull vent for the head to make sure that it is not blocked or that spiders have not built a nest there and that it is located above the water level, even when underway. If there is any blockage, it must be cleaned out. If it becomes submerged while underway, it must be relocated.

2. Next get a pump out. Make sure that there is 3” to 4” of water in the toilet bowl. During the pump out, observe the holding tank for signs of collapsing and the toilet bowl to see if the water is being sucked into the tank. If either of these conditions occur, this would indicate a blocked vent. If the toilet bowl loses the water, this could also indicate a blocked vent and or a defective flapper valve seal. During the pump out procedure, remove the vacuum hose and using a garden hose pour about 5 gallons of water into the tank trough the pump out fitting and then pump this out. If the water flows feely into the tank, the discharge hose is clear, if not, this indicates a blockage which must be cleaned out or the hose replaced. Most blockages occur from sludge or toilet tissue build up at the exit points of the holding tank.

3. If you have a level sensor system that is malfunctioning or operating erratically, this could be an indication of sludge buildup inside the tank or fouling from toilet tissue.

4. Check the holding tank for sludge build up or fouling by tapping the tank with the handle of a screwdriver or your knuckle. You should hear a uniform hollow sound. If the sound is more like a dull thud you should inspect the tank for fouling. WEAR RUBBER GLOVES, PROTECTIVE CLOTHING AND FACE AND EYE PROTECTION AND PROTECT YOUR BOAT WITH PLASTIC SHEATING. THIS COULD GET MESSY. Some tanks have inspection ports that can be opened for this purpose otherwise you can remove the large hose that leads from the toilet, which will be located on the top of the tank or the upper side of the wall. Use a flashlight, and a mirror if access is limited, to inspect the inside of the tank for sludge or fouling.

Most sludge and fouling can be broken down and pumped out by charging the tank with Odor Free. Replace the hose and pump in the required amount (instructions are on the bottle) through the toilet. Fill the tank about ½ full with fresh water. Deionizer, soft or distilled water works best. Use the boat as often as possible over the period of a week to allow the solution to slosh around and break up the fouling and then get it pumped out. You may have to repeat this procedure several times to get all the sludge out. If this fails, you will have to replace the tank. Regular use of Odor Free will prevent sludge and fouling in the future. It has tissue digesters that will break down toilet tissue as well.

5. Inspect all your hoses, or rigid plastic pipe on some boats, for leaks and make sure that the connections are sound by tugging on them. Hoses should be double clamped. Rigid plastic piping should be screwed tight. WEAR RUBBER GLOVES WHEN CHECKING THE PLUMBING. Flex and squeeze the hoses. If they are brittle, cracked or swollen and soft, they need to be replaced.

Wipe the hoses with a clean cloth and smell the cloth. If it has picked up a bad odor the effluent has permeated the wall of the hose. The main culprit for this type of odor is the discharge hose, from the toilet to the tank, but depending on the age of the boat and what you have been putting in your head, other hoses could be affected as well. Most cases of permeation odor from the discharge hose can be cured by flooding the hose with Odor Free To do this, pre-mix 5 oz Odor Free in 1 gallon of warm water. Turn the pumping mechanism to “Dry Flush”, pour the mixture into the bowl and rapidly pump it through. Do not use the head for at least 24 hours to allow the chemical to work away at the offending odor in the hose. This procedure is best done on the last day before leaving the boat for an extended period of time. Repeat this procedure once a week for 4 weeks.

If the head is used daily, after the initial flooding, add a heaping teaspoon full of Odor Free to the water in the bowl and flush it through at the end of each day. It can take several weeks before the odor is gone.

If the odor has been present from the hoses for a long time and this procedure does not work then the hose or hoses must be replaced.

6. Check the flushing mechanism and valves. There should be 2 to 3 inches of water in the bottom of the bowl. If the water keeps seeping out, the flapper valve seal and duck bill valve need to be replaced. If the odors can be identified as coming from the toilet bowl, there is a good chance the one way duck bill valve is defective and needs to be replaced. Follow the instruction in your owner’s manual to do this. Each head is a little different. These seals and valve should be replaced every few years to keep y our head in optimum condition.

The smell could be coming from the water in the bowl. This is a common problem if your boat is in salt water or if there is a lot of marine growth in your marina. The head pumps sea water from below the boat to flush the bowl. Algae, bacteria and other miniature or microscopic marine life get pumped in with the water and when it dies, begins to decompose and smell. This includes water in the intake hose as well as in the bowl. This odor is characterized by a sulfurous odor.

Flushing the head until the stagnant water is cleared will eliminate this odor, providing that you continue to use the head several times per day. The problem is that the odor will have permeated the boat and may linger for some time. Adding about one teaspoon full of Odor Free to the bowl water when you retire at night or when you will be leaving the boat should eliminate the odors from the bowl. When you return to the boat, flush the stagnant water from the intake hose to clear it and this should eliminate that source of odor. The other solution, in extreme situations, is to plumb a line from your fresh water tank to the toilet and use your fresh water supply to flush your toilet or to add another fresh water tank for this purpose.

7. Make sure that your flushing mechanism is working properly. Most heads are either manual or electric, relying on a plunger to draw water into the bowl and open the flapper valve at the same time. The plunger seals have a habit of drying out or becoming abraded from sand or other debris that is being drawn in with the sea water. It’s a good idea to disassemble the plunger at least once a year and check the O rings and lubricate them.

8. If you have a macerator, flush the head and listen to make sure that the macerator is operating. If not, first check the fuse or circuit breaker and the wire connections. If these check out and it is still not operating, refer to the owner’s manual.

10. Odor Free uses a Time Release granular system. Some of the chemical works immediately to knock out odors, some over a period of days and some over a period of weeks. It has proven effective at eliminating the smell from hoses, often saving the boat owner considerable money and grief from the necessity of replacing hoses. It is effective at breaking down sludge from the tank walls so that pump out is complete and sanitary. It also contains tissue digesters to break down toile tissue so that you can use household tissues instead of the more expensive marine tissue, saving you money. Fouling from tissues is the leading cause of fouling of level sensor probes in your tank. Regular use of Odor Free along with regular minimal maintenance will eliminate odors and most of your head woes.

Use of household solutions like bleach, hydrogen peroxide and toilet bowl cleaners will only attack the plastic, rubber and metal parts in your toilet system. You will suffer from poor performance and when you have to replace the damaged parts the cost will far outstrip any saving that you may have gained. 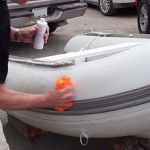 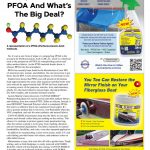 As seen in great lakes scuttlebutt...

How to protect and shine a brand new rib... 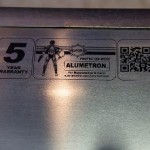